Last Friday’s government report on the economy, detailing Q3 GDP growth of only 2.0 percent, confirmed that the U.S. remains mired in a low growth, high unemployment paradigm. In a viewpoint I wrote for EE Times in February 2009 I predicted as much noting that the government’s economic stimulus package was more likely to make things worse than better and that strong sustainable economic growth requires a powerful technology innovation, like the internal combustion engine or microprocessor, being in its growth stage. I argued since 2000 there has been little real sustainable growth. I focused that short viewpoint on the impact of technology on the future growth potential of the economy. But with poor economic performance now confirmed it is worth spending some time on how government intervention can actually make things worse by among other things fostering economic zombies.

Back in February of last year I gave a passing mention as one harbinger of our future, Japan’s lost economic decades, where massive government infrastructure spending and direct liquidity injections into banks failed to revive the economy. Japan is an especially worrisome example of government debt spending not curing the problem of too much private sector debt, because its period of prolonged economic under performance began despite the global economy enjoying strong growth. Since then more people are taking note of Japan’s example and wondering if we also are in a balance sheet recession. For Japan this was the breeding ground for its economic zombies—banks and companies terminally ill from bad debt, but kept in a semi-alive state by government capital injections.

Money lent to such Japanese companies was hoarded to shore up their weak balance sheets, rather than going to loans in the cases of banks or investments in the cases of businesses. Given the precedence it’s not surprising that since the U.S. government injected money into banks much of that money has been hoarded rather than loaned—it’s precisely the reason why I among others urged that government banking intervention come in the form of directly removing toxic securities from bank balance sheets, in order to avoid this facet of a balance sheet recession commonly referred to as a liquidity trap. And let me mention here that this post isn’t about decrying any political party whether the Republican Bush administration that initiated the bank bailout, the Democratic Obama administration that crafted the stimulus plan or even the Liberal Democratic Party of Japan preceding over its own prolonged economic slump. Rather the fault focused on here lies largely with the economists, whose advice makes the label of the dismal science appear far too kind.

Stating in that viewpoint that the government’s economic policy makers were likely to make things worse because they simply did not understand our economic predicament I hardly expected a bit over a year later for the chief architect of the stimulus to admit as much in her farewell luncheon. As reported by the Washington Post, “Christina Romer, chairman of President Obama’s Council of Economic Advisers was giving what was billed as her “valedictory” before she returns to teach at Berkeley, and she used the swan song to establish four points, each more unnerving than the last: She had no idea how bad the economic collapse would be. She still doesn’t understand exactly why it was so bad. The response to the collapse was inadequate. And she doesn’t have much of an idea about how to fix things.” In hindsight nothing makes the point that the government’s economic experts were clueless as the chart they produced showing unemployment with and without the stimulus.

With the benefit of hindsight there are only three possible conclusions about the wisdom of the economists like Christina Romer and Larry Summers, who now no longer find themselves employed at the White House: (1) they were unaware that the growth potential of the economy was much lower than the historical norm; (2) the government policies they supported actually made the situation worse; (3) both the above. While my earlier EE Times viewpoint and more recent blog post, “The Three Bears Economy” focused on point one, this post is about delving into the second point about how government policy may have made things worse. Yet, I still hold to my original thesis that the anemic state of the U.S. economy has more to do with the absence of a major technology driver and the collapse of two significant asset bubbles then it does with any recent government policies. That said there is likely some truth that a contributing factor to the current unwillingness to invest by U.S. companies with healthy balance sheets and immense cash reserves is the regulatory uncertainty created by government interventions.

Returning back to the example of Japan, it is important to remember it wasn’t all about the banks. The U.S. stimulus plan was supposed to be about “shovel ready” infrastructure spending, similar to Japan’s failed Keynesian efforts to stimulate its economy with massive infrastructure spending. Some economic common sense is worthy applying here. First, government fiscal spending must either be supported via taxes taken from consumers and businesses or borrowed thereby driving the cost of capital up and decreasing the amount available to businesses and consumers. In other words there isn’t a free lunch and for such government spending to have a positive impact it must be more efficient than the private sector investments and consumption displaced.

Second, the U.S. government is simply not structured to intervene efficiently in the economy, with President Obama himself recently confessing to the New York Times that there is no such thing as a shovel ready project. Bureaucratic issues meant much of the stimulus money went to temporarily sustaining jobs in state governments, with only about eight percent going to infrastructure projects that of themselves were arguably of dubious value. Lastly, the money must of course be paid back with interest in the future and has contributed to the further weakening of the federal government’s balance sheet and the role of the U.S. dollar as the world’s reserve currency.

Corporate Japan had its share of zombie companies, but in the U.S. where corporate balance sheets are in good shape, it is governments that have become the living dead. For example taxpayers face as much as $3 trillion in unfunded pension obligations in state governments. Some states are worse than others of course, with California’s balance sheet looking like it is straight out of a horror movie. And state workers whose jobs have been temporarily saved by stimulus dollars aren’t likely to stimulate the economy with spending when they know that structurally their job cannot be supported long term. For those hoping that stimulus spending on education might have a longer-term stimulative impact on economic growth, the numbers here also look Zombie like. Since 1970 education spending in the United States has doubled with reading and math scores flat lining in a fashion reminiscent of a dead hospital patient, as the money is consumed without producing any improvements. 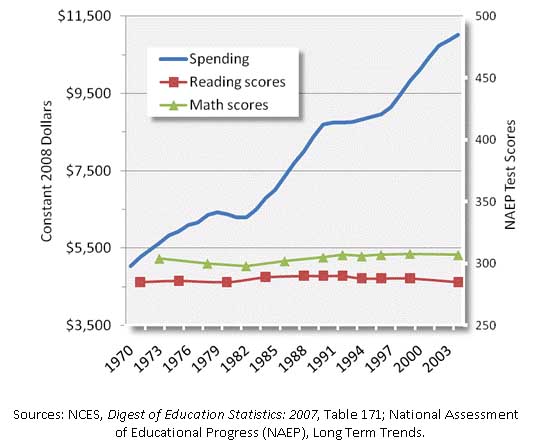 Thus, there is good reason for people to feel like the over $800 billion in government stimulus spending went down a hole with little to show for it. A further analysis on the low returns of the stimulus spending and some of the issues with Keynesian style interventions can be found here in this essay written by a Harvard economist, who actually seems sympathetic to such government interventions. And those who push such plans bring us to our last class of the economic undead, the intellectual zombies. Neither facts nor reality get in their way, as they keep mindlessly advocating such interventions. Even an economist like Romer who should be commended for her honesty in admitting she doesn’t understand the full nature of the problem, still insists she would do the stimulus again if given the chance. Others are even worse arguing that the problem was simply that the stimulus wasn’t big enough.

But it’s not just about the stimulus. Banks and financial institutions were led into the credit crisis and real estate meltdown based on economic models that broke down just when they were needed most. In fact the models of economists have a habit of doing exactly that time and again, yet the academics still mindlessly stumble forward in their attempts to model global markets, which have proved too complicated to capture with the accuracy needed to forestall disasters. Instead their models have helped create disasters by enabling unwarranted risk taking, and their cures sometimes bare more resemblance to the abandoned practice of bleeding a patient with leeches than modern medicine.

Along with ignoring history to justify interventionist policies, history is also rewritten. After authoring that viewpoint in EE Times one of the editors went out of his way to attack my piece describing every paragraph as incorrect and leading off with the assertion that the New Deal of the Roosevelt administration was an economic success. That one left me shaking my head. The historical consensus of economists is that the New Deal failed to end the Great Depression and the facts show that only with U.S. entry in the Second World War did prosperity return. And while the data clearly shows that the New Deal did not succeed in ending the Great Depression, some economists go even further arguing that the interventionist policies of the Roosevelt administration bare the majority of the responsibility for the Great Depression and draw parallels to our current situation.

The same argument is also made by some that the magnitude of Japan’s economic downturn was driven via the resulting interventions aimed at fixing the problem actually making it worse by among other things sustaining economic zombies, which rather than being allowed to die, continued to suck the life out of the economy. Trying to heed these lessons the new government of the United Kingdom has recently rejected stimulus spending in favor of instead cutting spending on programs that consume capital without producing economic growth and is working to repair its sickly balance sheet. Some policy makers are starting to realize that no matter how much you spin, twist and torture the data, you can’t simply borrow and spend your way to prosperity. The next recession is likely to see some of our government zombies, sustained through this last recession by the surge in Federal spending, die in a manner that will be painful but necessary for the return of strong, sustainable economic growth afterwards.

UPDATE on December 1, 2010 the Wall Street Journal posted an editorial “Why the Stimulus Failed” detailing some of the empirical studies on this topic.