In December 2017 a community nonprofit organization made a big news splash with a flurry of prominent media coverage around the local hunger issues it was grappling with. This coverage included a front page Guardian article that was featured prominently in Internet news aggregators, such as Google News and Drudge Report. For Second Harvest Food Bank in Santa Clara and San Mateo Counties this coverage wasn’t due to luck. It was the result of a comprehensive and well-executed public relations plan. About a year later, now seems like a good time to tell the story behind that story.

On the surface articles, like The Guardian’s, “The Silicon Valley Paradox: One in Four People at Risk of Hunger,” appear to be about reporters digging into a just released study on hunger and covering the important details for their readers. And it was about that. But it was also about months of planning and effort beneath the surface to create and package a compelling story. For a PR program, it was one of those overnight successes that behind the scenes require months of work.

That backstory, began in early 2016, when I was brought into Second Harvest, as a consultant to restructure and lead the marketing department. I almost immediately began hearing about an ongoing study focused on local hunger, and by September was starting to see the initial data and results. The numbers were sobering. Over 25 percent of residents in the two counties served and over 700,000 people were hunger insecure. For instance, even if they were getting food it might be at the cost of not paying a utility bill, being evicted or selling personal possessions.

From a marketing perspective the study had many potential implications, including for product marketing and how charitable services might be enhanced. In terms of PR value, I immediately saw its potential to raise awareness and support our fundraising efforts. I’d been brought late into the process of the study, but immediately pressed for two actions. First, before we signed off on the work done by the market research firm, I insisted we be provided with an explanation of the soundness of the methodology that a journalist could understand and I moved to validate the statistical process with third party associates.

Once I was satisfied that we could confidently represent study findings that some would find hard to believe as valid, I argued for and got a blackout on talking about the study. Yes, it was exciting news, but if we started talking about the data and it got picked up on social media or in a minor mention by a local reporter, it would become old news. You only get one shot at making the most noise you can around new news and I wanted to maximize it. Just releasing the study results and hoping for the best wasn’t going to produce the PR benefits I wanted.

Putting the Pieces Together

To achieve the success I envisioned this was going to take a team effort. Fortunately, for me I had been supported by our leadership in putting together the team we needed. I worked with our new marketing research position to fully understand the study, find corroborating data a reporter could cite and list reporters we could pitch who covered these topics. Another member of our team began working on finding people who would be willing to go on the record with reporters to tell their hunger stories and humanize any forthcoming article.

I also had great PR professionals to work with, including a long-time colleague I had brought in who could pitch the story when we were ready. I worked with them in determining that our best strategy would be to offer an exclusive embargoed article to a prominent publication, which ultimately turned out to be The Guardian. Offering an exclusive would help justify the significant time we were asking a journalist to commit, in order to write the substantive feature article we envisioned. We also knew our limitations, and that we would be overplaying our hand in trying to get multiple long feature articles out of this study. So, we went with an embargoed exclusive strategy.

In terms of timing, December 2017 was a logical choice. The survey data was ready to go by the end of 2016, and as such it wouldn’t be unusual for it to be released in the following calendar year. Much beyond that and it would begin to get stale. This would also give us plenty of time to write a strong pitch and press release, as well as make sure our social media program could be integrated in our efforts. In my mind, December 2017 wasn’t just the latest we should go, it was also the best timing, as our largest fund raising campaign of the year coincided with the holidays. That would be the best time to raise visibility on the hunger problem. 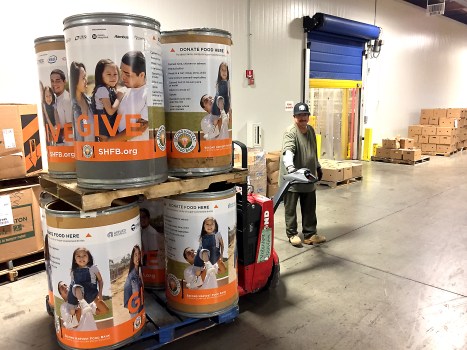 As we put together our strategy, media outreach targets, supporting data and personnel stories, I focused my time for this project on the positioning to create a compelling story. Our news would fit well with top-level messaging we had already been developing. We served Santa Clara and San Mateo counties in the San Francisco Bay Area. But a far more compelling angle was to talk to in terms of serving Silicon Valley, which our counties were the heart of.

People around the world know Silicon Valley—at the time for its innovation and prosperity. But some publications, like The Guardian, were starting to reveal the dark side of the Silicon Valley economy. That was an emerging trend we could leverage for the benefit of putting a spotlight on the overlooked people we were serving. It was also a financial donor base we wanted to reach.

I had already pushed for positioning in our ongoing outreach, around what I coined the Silicon Valley hunger paradox, with it being a highlight in our 2016 annual report. Our study results further supported our message of a paradox, where the better the Silicon Valley economy did, the more cost of living and housing prices or rents rose, with the worse off many service and other workers then doing. In fact, rising rents in particular were growing so much faster than incomes that local families were increasingly at risk of not being able to afford necessities, like healthy meals.

In my mind this could be another big step in us taking on the mantle of thought leaders, and getting people to rethink Silicon Valley, particularly around it being an epicenter of not just a growing wealth gap, but a hunger problem. When we got around to pitching the story, we would indeed find that breaking the hunger stereotype would be of particular interest to journalists. The untold truth was that in Silicon Valley, hunger wasn’t just about food kitchens serving the homeless. It was increasingly about a widely diversified group of citizens including food servers, healthcare and education workers being food insecure. This was a story that had not been told.

So, we packaged it all together. By December we had an original story with new and compelling data, showing a better way of calculating both the diversity of and alarming levels of hunger in this world famous center of prosperity. We validated and explained the methodologies, so reporters could be confident in reporting the information. We provided corroborating data points, and we also provided information around why previously accepted methodologies were lacking. Importantly we had real people who dispelled the hunger stereotype ready to talk and share their stories. We also cleared time on our spokesperson calendars to be accessible for interviews.

All that work should not be misconstrued as writing the story for the reporters. They still had a lot of work to do, particularly Charlotte Simmonds of The Guardian, who accepted our embargoed exclusive offer and committed full days of her time to visiting locations and interviewing people for her story. What we did was make her work worthwhile and manageable. We made it easy for her to get needed interviews, corroborate needed details, connect the information to important trends and be confident it would culminate in a compelling news story for her readers, in order for her to focus her limited time on writing a great article.

Indeed, our strategy around offering an exclusive embargo to a prominent journalist like Charlotte, was that a strong article from her would make a big impact in terms of people reading it and other media organizations subsequently covering the issue of hunger in Silicon Valley at the exact moment the Food Bank was busy in its holiday fund raising season. This is exactly what transpired, particularly on the Internet, where for example googling Silicon Valley and hunger would keep bringing up her story for a long time to come.

Soon after her exclusive story broke, CNN Money covered the impact of housing prices on hunger from an interview we provided, while RT also covered the study. And we received a burst of local media coverage around the study, including from nearly all the local broadcast news programs, like CBS KPIX, FOX KTVU, FOX KCBA, NBC KNTV, Telemundo Noticiero 48, as well as original coverage from other local media, like the San Jose Mercury News, Cupertino Today, and KCBS and KQED radio.

In fact Charlotte, even received some coverage on her coverage in an interview of her on National Public Radio’s Here and There. In the final analysis, in addition to helping our fundraising that year, we also made progress in changing perceptions in terms of the scope of the food insecurity problem in Silicon Valley, while setting the stage for future outreach around how this problem can be solved.