Why is the U.S. stock market still edging higher? Economic news and corporate earnings have largely been disappointing. Financial journalists who not too long ago proclaimed that falling oil prices would be a boon to the economy, as consumers had more money in their pockets to spend, have lately been writing articles about how the first quarter was disappointing, due to a strong U.S. dollar and those very same falling oil prices. As for me I still stick by my initial analysis that falling oil prices are a negative, due to their deleterious impact on a U.S. energy sector that was previously caring more than it’s weight, when it comes to creating good paying jobs and generating capex spending. What is more, many investors in 2015 reduced their exposure to U.S. stocks. So, how could stocks possibly seesaw their way, admittedly with more volatility and less upward price momentum, to new record highs? The answer appears to be a corporate buyback bonanza.

It sure was not economic growth driving stocks higher in 2015. Despite optimism this would be the year when the economy reached escape velocity and GDP began to grow at a more normal rate, inline with previous recoveries, Q1 GDP came in at about flat, as the below chart shows. And there is a good chance that future revisions  could even push it negative. An inventory buildup and other negatives, make a strong Q2 unlikely and the entire narrative of this being the year the economy becomes truly robust, has once again been put in doubt.

Nor is it corporate earnings that are driving stocks higher. Expectations were also high heading into 2015 for earnings and if anything those expectations have plummeted even faster than economic hopes, as evidenced by the below chart courtesy of Morgan Stanley, showing revisions to annual Wall Street earnings estimates. 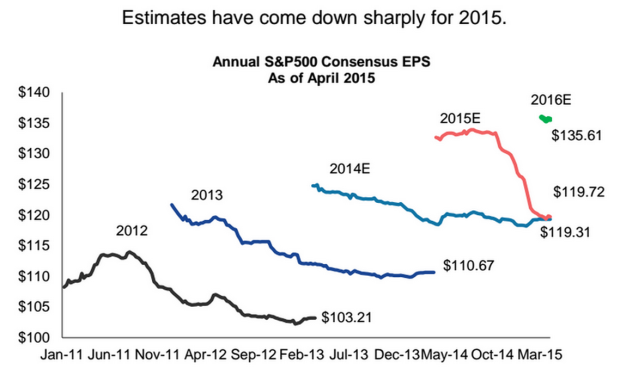 The most obvious conclusion is that investors are looking past immediate negatives and in some mix of hope for a better future or seeking better returns than offered by low yielding bonds or other investments, as well as an expectation that poor U.S. performance will still be better than overseas growth, are buying U.S. stocks. But for once, as the below chart shows that is not the case either, as investor flows of funds have recently been heading out of U.S. stocks in favor of other investments. 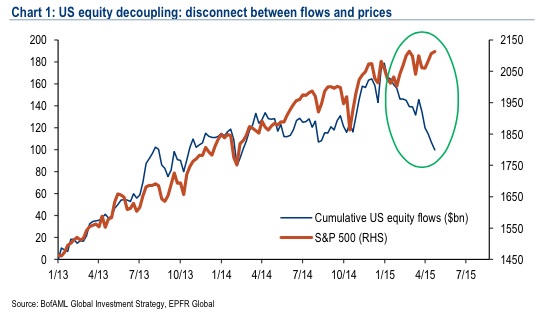 Instead it appears the big driver of stock market gains are corporate share buyback programs. I am not going to repeat the reasons why current earnings and buyback programs should be of concern to investors, as I already blogged on this topic. Regardless of the fundamentals, in terms of price action buybacks are currently a big positive for stocks. And the current year is on pace to reach an astounding $1.2 trillion in announced buyback programs. Examining the data makes it hard to argue that buybacks are not a big driver of stock market gains, as a large performance gap has opened between companies aggressively buying back their own shares and those that are not, irrespective of other factors, like actual sales growth or profitability.

What is more the current quarterly pace of buyback announcements at over $300 billion in the last quarter is exceeding the previous record set in 2007. Of course 2007 marked the last top of the stock market before U.S. stocks lost over half their value. One could argue that corporate executives are not very good market timers. They tend to buy the most stocks, with company buyback programs, when they are most expensive and not a very good deal for their shareholders. Then again it is not their personal money and they tend to do a better job when it comes to timing share transactions in their personal accounts. Nevertheless, this bonanza of buybacks is a positive for stocks that so far is in large part driving the market higher, just like buybacks did in 2007… until the negatives became too big to overcome. Rather than allaying my market concerns, this is just one more reason I remain worried that the market may possibly be topping and factors not connected to underlying fundamental are driving stocks higher than warranted. If you are investing your own money, unlike corporate executives managing buyback programs, you might want to think twice about buying U.S. stocks at current levels.